What Is Frozen Shoulder? Newcastle Physiotherapy

Frozen shoulder (or adhesive capsulitis) is a common clinical condition. While it has been extensively discussed over the years, there is still little known about why it occurs. 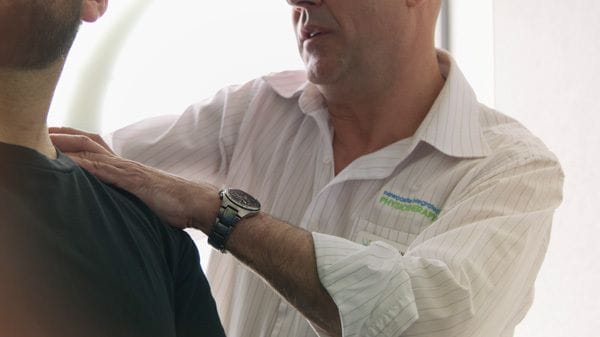 It has been proposed that frozen shoulder will affect 8.2% of men and 10% of women of working age. Although most cases have no known cause, there does appear to be a correlation between frozen shoulder ,rotator cuff tears and post shoulder surgery. It also occurs in people with diabetes and thyroid dysfunction.

A person with frozen shoulder will often experience three distinct phases of the condition.

Even though frozen shoulder is a self-limiting condition and the person will eventually recover, this process can take more than two years, resulting in significant reduction in function in the meantime.

A new trend in treatment combines physiotherapy, guided exercises and passive movement with 'hydrodilatation' where the joint capsule is injected with a saline/steroid compound to stretch and ultimately tear adhesions.
This treatment provides an alternative to invasive surgery, improving both function and pain.

Studies focused on physiotherapy and surgery have shown that completing physiotherapy exercises in the initial stage can help minimise the amount of movement lost. Surgery to 'release' the shoulder capsule has varied results in terms of both pain and function.
If you have recently been diagnosed with a frozen shoulder please call us to see how we can help you return to regular activities quicker!

Are You Feeling Hamstrung?

Posted by Zoltan Marosszeky on 13 August 2018

You don't need to be an elite athlete to sustain a hamstring injury. It's one of the most common injuries in sports like football, soccer and basketball, which require a high level of power, agility and speed.  It's important to know how to best avoid injury as well as how to manage if you do sustain a strain.

Put simply, the hamstrings are a muscle group made up of three individual muscles, which perform slightly different roles. Crossing both the hip and knee joint, they provide strength in the hip and support the position of the knee when running.

The hamstrings have three jobs to do during a typical running cycle:

Tears often occur either during the swing phase where the hamstrings attempt to counteract the contraction of the quadriceps. If there isn't enough power generated by the gluteal muscles at the heel strike the hamstrings need to work harder and can become overloaded and tight, leading to a strain. This tightness can also lead to other issues such as lower back pain, SI (Sacroiliac) Joint pain and pressure under the kneecap.

The good news is, there are things you can do to help prevent injuries, which are well known but not as well performed:

Stretching is always is the best way to prepare for any form of rigorous exercise, but don't forget to take the time to stretch afterwards as well.
Warming up to increase body temperature will help your body get the most out of exercise and assist in avoiding injury.
Subscribe via RSS
Tweet

Protect Your Posterior With Sports Physiotherapy

Posted by Zoltan Marosszeky on 6 August 2018

Did you know that the posterior chain muscles (the lumbar extensors, glutes, hamstrings and calf) could have a huge impact on your sporting performance?

Tight hamstrings, recurrent muscle tears and lower back strains can all be signs of muscle imbalance within this group.

A physiotherapist will complete an assessment focusing on muscle strength, length, stability and muscle timing patterns to come up with a program specific to you, helping you get back on the field quicker and with fewer recurrences of your injuries.

Let us help you stay ahead of the game. Call us today for more information on how Sports Physiotherapy can help with your sporting performance or to book an appointment with our physiotherapists at Newcastle Integrated Physiotherapy on (02) 4957 2961
Subscribe via RSS
Tweet

How to Enhance Your Running Performance with Newcastle Sports Physiotherapy

Running is quite often seen as a good way to get in shape, with little thought given to the proper form or biomechanics involved.

Recent studies have shown that as many as 79% of runners will suffer from a running related injury in any year. Therefore all runners should be aware of the ways in which poor form can contribute to these injuries.

Further research has shown that real time feedback through audio and visual cues can help a runner to improve common issues at the hips, knees and ankles and in turn reduce the likelihood of a running related injury.

If you're thinking about getting into running make an appointment now with one of our physiotherapists or exercise physiologists now for an assessment and recommendations.

Up to 1 in 10 people will suffer from Plantar Fasciitis (persistent pain along the arch of the foot) in their lifetime.

Physiotherapy can benefit people suffering Plantar Fasciitis, though a study of over 800,000 people showed that only 7% of patients were prescribed physiotherapy.

Of those treated with Physiotherapy, positive outcomes in recovery time as well as overall cost to the patient was found when physiotherapy included manual therapy and exercise prescription.
If you're suffering from foot pain making an appointment with a physiotherapist might just be your first step to walking freely again.

What is DOMS? Delayed Onset Muscle Soreness or "DOMS" describes the painful ache into your muscles that starts 24 -48 hours after com...
Read More

We recently welcomed a new Physiotherapist, Marnus, to our team.  Marnus grew up in a number of locations around Australia, before comp...
Read More
Read more news